You may remember the PapaBehr Kickstarter campaign that was successfully funded back in 2013. Well, if you were interested in buying one of these cool vinyl figure USB flash drives but missed the Kickstarter, then you are in luck!

I initially got the idea to make a vinyl toy at SDCC (San Diego Comic-con) back in 2011. I was inspired by all the awesome toys there, especially the ones produced by Kidrobot and a bunch of other independent artists. So my uncle and I set out to produce a prototype of a character that I had sketched up in school. It was more of a impulse idea, we just sort of went “Yo, let’s make a toy.” We had no idea what we were getting ourselves into and the amount of work it would take to produce a toy.

We wanted to make a desktop figurine because we spend countless hours in front of computer for work. We also decided to make it functional, so we decided to put a USB stick in his detachable head. My uncle rendered PapaBehr in 3D and we grew a prototype from his 3D printer in Emeryville, California. We’ve never done anything like this before so we had a ton of revisions. It took well over 200 hours total to get it right. That time included drying the plastic, sanding, assembly and painting. We had a lot of detachable pieces (armor, weapons, etc.) and moving parts, so we had to make sure it all fit correctly. Each toy is also made with magnets to detach the armour. We thought about all the toy accessories that broke because of the plastic snaps, so we decided to take a different approach and have accessories detachable with magnets.

Once we completed the PapaBehr prototype, we decided to take some pictures and share it with the internet. We put an album of the whole prototyping process up on Reddit and we got a huge response. Quite a few people recommended that we put it on Kickstarter, so that’s what we did. We made a video and put it up in April 2013. We hit up every vinyl toy blog and resource we could to get PapaBehr out there. In May 2013, we were raised 3x as much as we wanted and were able to produce a few more versions of PapaBehr as a result. We designed a “Destroyed PapaBehr” version and a “Neo-Samurai” armor set.

Since the kickstarter ended, it took a good year and 6 months to actually get it fully manufactured. The delays we had were mainly due to the language barrier with the factory in China. That and the fact that our toy is more complicated than traditional vinyl toys. Our toy has a USB stick, removable armor (attachable via magnets), removable weapons, intense color-ways etc. So it was quite the task to get them to understand how to produce these toys properly and maintain high quality. After almost pulling out all our hair, we finally got the shipment in California to ship to all of our backers around the world.

The project was extremely difficult, but we learned a great deal about the toy manufacturing process and we created a toy that we’re extremely proud of. We’re going to try and keep making more toys, so stay tuned! 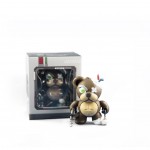 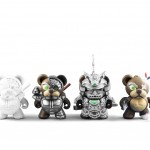 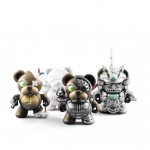 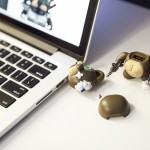