OVERLORDS OF THE DESERT by Aaron Childs at Designer Con 2014

Designer Con 2014 is fast approaching, and some cool paper action figures from designer Aaron Childs will be available! Click through to check out the press release! Aaron Childs is a cardboard artist who will be an exhibitor at Designer Con 2014 which takes place November 8th-9th at the Pasadena Convention Center, located in Pasadena, CA.

Aaron Michael Childs is an artist who lives in Phoenix, AZ. He is a Marine Corps veteran who served for four years active duty. Two and a half of those years were spent with the Marine Security Company at the Presidential Retreat Camp David. He earned his Bachelor’s degree from the University of Phoenix in Operational Security and Management. He currently enjoys creating unique and entertaining characters that have distinct personality.

Aaron is a child at heart who still collects toys and his art reflects that by having strong toy themes. When drawing, Aaron enjoys using pens, markers, and colored pencils. When sculpting, Aaron enjoys the basics of cardboard, tacky glue, and scissors. His first attempt at creating a paper toy line resulted in the creation of the Overlords of the Desert. Aaron’s work can be viewed at http://www.overlordsofthedesert.com 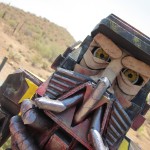 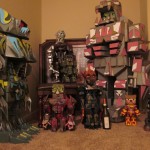