Our friends over at The Fwoosh have released details for their upcoming new line of action figures known as Articulated Icons, coming soon to Kickstarter! Click through for full details! Los Angeles, CA –– Silent shadows hold unseen danger. Steel whispers the fatal strike. Between breaths, between blinks, the ninja makes his home; a nightmare apparition that means death to those he seeks. In times long past or futures unwritten, these invisible assassins stalk their prey, draped in the stillness of the night, leaving only mystery in their passage. Beware the darkness that lay between myth and legend; the ninja is there. Immortal warriors that live only for the bloodlust of battle, the Great Ninja Clan is the most feared opponent. Where the others fight their wars in the light, the Ninja owns the shadows. But when the Ninja Master is betrayed and murdered by unknown assailants, the Great Ninja Clan is irreparably split apart. What was one is now many as ninja fights ninja and brother fights brother to the uttermost end.

The Fwoosh has been a source for action figure news, toy reviews, and discussion for over twelve years. As supporters of successful Kickstarter campaigns like the Mythic Legions by Four Horsemen Studios, and Vitruvian HACKS by Boss Fight Studios, we have decided to take the first step in creating our own line of collector action figures. After years of careful planning, the Fwoosh staff has gathered the resources and capital needed to create prototypes that will be used to launch our forthcoming Kickstarter campaign. The Fwoosh presents: Articulated Icons: The Feudal Series, our first foray into the world of 1:12 scale super-poseable action figures. Series 1 will be comprised of ninjas, along with a few stretch goals (already fully prototyped by Gentle Giant Studios), that will help fill out the theme with additional characters to add to your 6-inch scale action figure collection.

The initial launch will be composed of four figures and a modular wall-mountable base pack. The Basic Ninja, available in black and red variations, will be offered as a single release or in discounted packs of three. The Deluxe Ninja, with the Ninja Master head sculpt, includes a unique belt and shins, as well as new weapons and accessories. The Deluxe Ninja will be available in both black and white variations and will also include one rooftop base. The modular wall-mountable base will also be available in bulk sets of five.

Pricing is still being finalized, but approximate pledge levels/pricing are listed below:

Backers at this level will receive ONE of each item listed below, including all unlocked Stretch Goal items (a $585 value!):

Kickstarter campaigns operate under an “all-or-nothing” model, so if Articulated Icons: The Feudal Series does not reach its funding goal at the end of the campaign period, it could be years before it makes it to market. Please consider pledging to help this project come to life; pledges can begin at as little as $1 and are designed to accommodate a variety of commitment levels. Depending on your pledge, you could be commanding an army of ninjas in the months to come!

Look for the Kickstarter to launch early September 2015 with shipping estimated to occur in the 2nd quarter of 2016 if successfully funded. 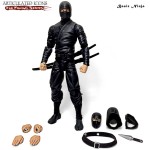 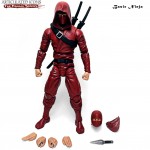 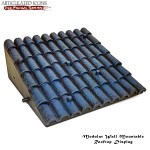 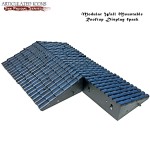 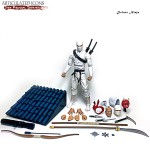 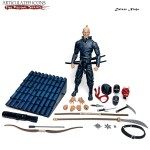