A new series of the incredible OMFG!: Outlandish Mini Figure Guys has launched on Kickstarter! Click through for all of the details, and back the project today! Series 2 of the Outlandish Mini Figure Guys, or OMFG, are starting to arrive! Once again, many sites are getting their own exclusive colorways.

Join me for a look at the LittleRubberGuys.com exclusive Metallic Purple and Neon Green versions! ShelfLife.net has a pretty sweet exclusive set of OMFG Series 1 and 2 that go on sale today! Click through for details! Each set of five color changing figures come bagged with header card for only $10. These two inch PVC minifigures change from black to “stealth” clear with heat and are limited to 200 sets.

Available at New York Comic Con booth 3216 Friday 4-7pm or booth 3261 Friday – Sunday. A limited quantity will also be available at OctoberToys.com, but only during NYCC show hours Friday to Sunday! 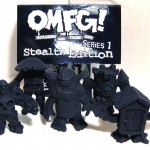 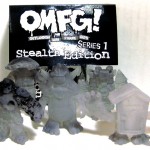 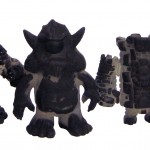