Full details on the new PVC Mystical Warriors of the Ring figures have been released! If you’ve been hoping for a chance to jump on this line but weren’t able to commit to the price of the resin figures, here is your chance to get these awesome mini figures at amazing new low prices!

Mystical Warriors of the Ring (http://www.mystwarriors.com) is a 2″ minifigure line launched earlier this year by Fantastic Plastic Toys
and prototyped by Marty “THEGODBEAST” Hansen.

These PVC pieces are made through a partnership between Fantastic Plastic Toys & True Cast Studio, they are made in the Onell Factory
(same factory that produces O.M.F.G., Spy Monkey, and Glyos), and the first limited production run will be available at NYCC in the Onell
Design Booth #102 from Marty directly.

Each 3 pack will be $9 (figures will not be sold individually) and there will be no limits!

The first two colors are Flesh and Candy Apple Red. 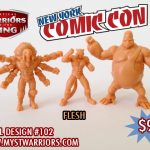 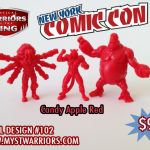