From the talented minds behind Galaxxor in collaboration with ManOrMonster? Studios comes Sgt. Krugg, the Hippo Titan Soldier! Sgt. Krugg goes on sale this Friday! Click through for details and images.

From the planet Kabagiff, in the solar system that revolves around the  blue star Anubis 5, comes Sgt. Krugg, Hippo Titan Soldier! Under the  benevolent rule of Imperator Zog, the Kabagiffian are a heroic and  militaristic race who rebelled against General Gorgax and his Evil  Mutant Legion with the help of Galaxxor 001. Given the divine sanction  of The Seven Space Gods, The Kabagiffian Army staunchly defends its planet from invasion and also lends assistance to peacekeeping Galaxxors when additional support is required.

Sgt. Krugg was designed, sculpted and mashed up by Ben Spencer and  engineered and produced in resin by ManOrMonster? Studios. He features 3 points of magnetic articulation (waist and shoulders), as well as a  blunderbuss accessory, which can be held in his hand or magnetically  mounted on his hip or back. Krugg was hand painted by Ben Spencer. This  figure is limited to an edition of 5 and will never be released in this  colorway ever again. The added element of the magnetic articulation adds a really cool “play” value to The Hippo Titan Soldier, which is an exciting new thing for my toys. It’s also worth noting that the magnet system is completely  compatible with all ManOrMonster? figures, including the awesome Warlords of Wor line. Magnets! How do they work?

Sgt. Krugg, Hippo Titan Soldier will limited to an edition of 5, and be  available at noon CDT on 05.24.13 for $85 each, exclusively from The Galaxxor Online Store. 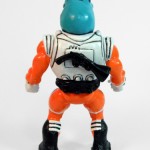 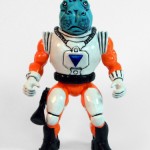 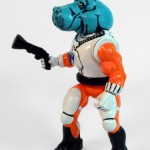 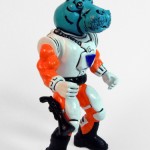