This might be one of the most amazing SDCC exclusives I’ve ever seen, mostly for that whole “never in a million years did I think I’d see this figure” kind of way.

Figures.com broke the news about the upcoming San Diego Comic Con exclusive Jason Voorhees figure that is based on the way he looked in the classic Nintendo game. Since then, NECA has posted several more pictures on their Twitter account.

And he glows in the dark! NECA’s Friday the 13th Jason (1989 Video Game Appearance) Comic-Con Exclusive will be a fully articulated 7-inch figure done up in that truly horrifying video game deco. Better yet is Jason’s glow-in-the-dark features. Jason’s mask, hands, and feet will glow a soft blue, while his included machete blade and axe head will glow white. This comic-Con exclusive will come in a special window box packaging with opening flap to re-create the look and feel of the classic 1989 Friday the 13th video game packaging. Fans can pick up Friday the 13th Jason (1989 Video Game Appearance) during San Diego comic-Con July 17-21 at NECA’s booth #3145. This exciting exclusive will be priced at $25. 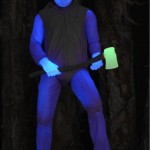 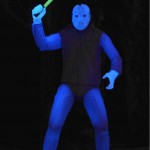 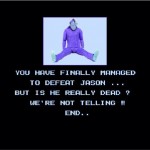