Mattel continues their 5 days of San Diego Comic Con 2013 Exclusives reveals. Today, we get a look at yet another Hot Wheels exlcusive and the DC Club Infinite Earths exclusive. Sculpted  by the Four Horsemen, this is the first ever figure of the New 52 Billy Batson, the boy turned DC Super Hero known as “Shazam!” Not included with club subscriptions,  this figure arrives with a removable hood in Club Infinite Earths die cut  packaging with distinctive silver foil. The perfect addition to your DCU collection!

While I haven’t been overly fond of the New 52 costumes, I have been getting used to them. And honestly, I’ve been pretty happy with Mattel’s figures based on these costumes thus far. I think the Horsemen have done great sculpt work on these figures, specifically with Batgirl and Hawkman. I do like Captain Marvel’s New 52 look with the white hood, and from the pictures it seems to have translated well to figure form. Plus it looks like he’ll have cool packaging, a staple of recent DCUC SDCC exclusives. I guess I just don’t get why he has to be an SDCC exclusive. Seems like he would be a candidate for a regular retail release. There’s nothing better than the lights and sounds of an arcade game… except maybe a Hot Wheels® car, of course. You’ll be transported back to the local video arcade with the Hot Wheels® Atari Beach Bomb™ Pickup, finished in Red Line Club level hand polished Chrome Spectraflame® and Asteroids deco! And just like the arcades of old, this awesome finish will soon be a thing of the past… this will be one of the last hand polished Chrome Spectraflame® Hot Wheels® car offered. Features diecast body and chassis, and Real Riders® wheels.

I don’t collect Hot Wheels, but I do grab the occasional special car. Generally the Batmobiles, Ecto-1’s, Deloreans…you get the idea. I do enjoy retro video games, and the packaging alone on this one is pretty cool. I think I may pick this one up. 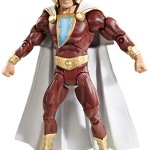 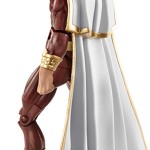 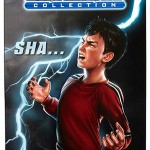 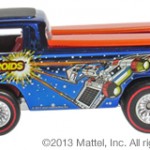 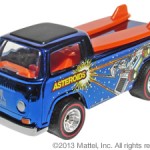 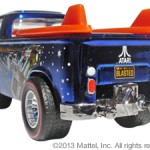 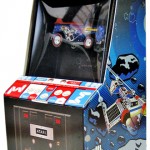