The debate over the reversed forearms on the upcoming MOTU Classics Stinkor has been a very hot topic among fans over the past week. This thread on He-Man.org is a prime example of how fans are reacting.

Last week I posted a comment directly from Mattel where they stated that the arms were reversed on purpose. Mattel says this was a decision from the in-house design team in an effort to make Stinkor “pop” and differentiate him from other figures who utilize the finned forearms.

Mattel has stuck by this statement, as many questioned them on the MattyCollector.com forums. After similar mistakes happened with reversed parts on figures like Roboto and King Hsss, its understandable why fans may be having a hard time accepting Mattel’s statement as truth.

“We haven’t seen a production version yet so we really can’t comment yet, but we can’t imagine why they would be switched.”

In my opinion, this statement from the Four Horsemen does not prove that Mattel is outright lying about their decision like many fans are claiming. I feel that all this proves is that The Four Horsemen did not intend Stinkor’s forearms to look that way. We already knew this, considering we saw the original prototype at Power-Con, and the forearms were correct.

Now, I am not at all defending Mattel’s decision on this, so don’t get me wrong. I agree that it seems incredibly odd to swap parts for the sake of swapping them, especially when it throws off the anatomy. I’m just saying that the Horsemen have only stated that they also don’t know why Mattel made the decision to swap them, if they did indeed purposely do so.

The debate continues to heat up, so it’ll be interesting to see where it goes. What do you think? Was this a QC issue? Or do you believe this was a decision by Mattel design, albeit an odd one?

RetrowareTV.com is the first website that I produced videos for exclusively, as they were huge supporters of my video game-themed action figure series From Pixels to Plastic. I’ve become great friends with the folks over there over the past 4 years, and was thrilled when they asked me to be part of their new project: The Video Game Years.

“The Video Game Years are here! The exclusive RetrowareTV.com show that examines the history, culture, and the oddities of video game history will have you learning, laughing, and scratching your head as we examine all that transpired in our favorite hobby’s past.”

From NerdRageToys.com: Great news for all you GI Joe fans!

GI Joe Retaliation figures and vehicles are now up for pre-order. We have individual figures for the entire first wave, as well as Bravo and Delta class vehicles.

We also have a very limited supply of 9 figure sets of wave 1 at a discounted price! Don’t miss out on that great deal.

Follow the link below to jump to our GI Joe Retaliation Page: http://nerdragetoys.com/?page_id=184&shopp_category=98

We have a giant “bargain bin” filled to the brim with GI Joes, Ninja Turtles, He-Man, and more! Everything in the bin is $2. There will also be a raffle for a $50 nerdragetoys.com gift certificate.

With that being said, nerdragetoys.com will have a very limited inventory available that weekend, as all of our items will be at the Con. Pre-orders, and Gift Certificates will still be available for purchase, as well as personal account access. Nerdragetoys.com will be back in full swing Monday, April 23rd.

Be sure to check out all of the great lines we have to offer.
http://nerdragetoys.com/

Thank you to everyone for your business.

Since the Stinkor reviews have hit the net this past week, many fans have started to notice something a little “off” about him. While Stinkor has newly sculpted forearms combining the furry sculpt with the Skeletor “fins,” the fins do seem to be reversed.

On Skeletor, Mer-Man, and other figures who have the finned forearms, the fins always pointed more outwards. Stinkor’s point more inward. Because of this, fans were starting to wonder if this was another incident of Mattel accidentally swapping parts at the factory, similar to what we saw with the shoulders on Roboto and King Hsss.

While many fans have agreed that it doesn’t seem to be as noticeable on Stinkor, it was still becoming a question that was lingering. So I went straight to the source to see if I could figure out if the forearms are reversed or not. I asked Scott “Toyguru” Neitlich for a comment.

From Scott: “I checked with design and it actually was not a mistake but a deliberate way to differentiate Stinkor due to the heavy use of shared parts. Design discussed as a team and found that you could swap the gloves to create a slightly different look. They wanted to give Stinkor something extra since he is basically Mer-Man’s head on Beastman’s body and Mekaneck’s armor (even though we haven’t done Mek yet but you know what I mean!~). Much like painting Sorceress’ wings blue this was one way of making the toy pop a bit and be different on shelf. For reference, we also did this on BG Evil Lynn to much success!”

So there you go. Official word from Mattel is that they are reversed, but it was done intentionally by design. My very talented friend Joe Amaro has sent along some work in progress shots of his upcoming fan project that he is calling the Mystic Hammer!

From Joe: “It’s coming out great, a little more cleaning then it’s time to cast and paint. The size is almost 5″ tall…it’s massive…perfect for 12” figures!

Once I’m finished cleaning I’ll post pictures of the hammer with some figures to show the size and scale. You can see in the images below that the top part will be hollow. This is so that it’s not too heavy which will allow for some awesome posing.

I’m thinking it should be ready for sale in the coming weeks. The price will $15.00 plus shipping.  There will be a very limited quantity made as this is not mass produced.”

I am a huge fan of Joe’s work, and personally I’m very excited for this! I’ll definitely be sure to keep you all posted as updates come in. But if you guys want to check out Joe’s work for yourself (as you should!), you can follow him at his blog. 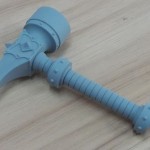 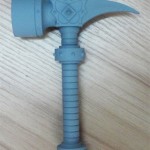 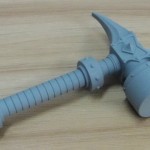 I was going to think of a clever title for this post, but figured I might as well just call it exactly as it is.

Ladies and gentlemen, I present to you this teaser image of a figure coming to the Masters of the Universe Classics toy line… I’ve been jumping for joy from the moment I found out! I expect that the full figure will revealed at SDCC this year.

Special thanks to Scott Neitlich and Mattel for giving me the honor of breaking this very exciting news!

My good friends from Pop Culture Network are at the Chicago Comic and Entertainment Expo this weekend (lucky!), and have been reporting on the latest toy and comic news! Check out this video where they reflect on some of the cool stuff they were able to find out! Welcome, my friends, to PIXEL-DAN.COM!

It’s my own little piece of the internet. A place I can call my own. And a place where you are more than welcome to visit any time! Come on in, have a drink, and watch a review!

My goal with this site was to put together a one-stop shop to find my latest video reviews and share my love and passion for collecting toys with the world! I’ve already posted a lot of my back catalog, so you should be able to easily find any of my Masters of the Universe Classics reviews, episodes of From Pixels to Plastic, reviews on ThunderCats, Voltron, Kotobukiya, and much more!

Plus, all of my latest reviews and videos will be posted here going forward! I’ve done my best to make it easy to locate exactly what you’re looking for. So check the categories or “Featured Videos” sections to the right, or use the handy “Search” function! And if you’d like to see a full listing of every review I have available on this site, check out the Toy Review Index up top!

It’s also very easy to share anything on this site via Twitter, Facebook, Google+, etc! I highly encourage you to do so! Help spread the word!

Aside from my toy reviews, I’ll also be using this space to post my thoughts on some of the latest news and info coming from the world of toys and collecting!

Discussion is encouraged, so please post your comments! I’ll always be here to chat back!

I think that pretty much sums it all up! So once again I say WELCOME! And thanks for joining me on this new venture! I’m very excited to share my work and my thoughts with each of you!

Vote for the cover of the Unofficial Cartoon Guide to He-Man 2nd Printing! My good friend James Eatock, creator of Cereal Geek Magazine, is asking for your help in determining the cover of the 2nd printing of his amazing Unofficial Cartoon Guide to He-Man and the Masters of the Universe!

You can head over to James’ Facebook page and tell him which cover you prefer! And if you missed out on the first printing of this incredible guide, make sure you pick up this 2nd printing when it’s released!